Such is Manchester City’s reliance on Carlos Tevez, that it was not long after Saturday’s defeat at Wolves that his phone beeped with a text from a team-mate. 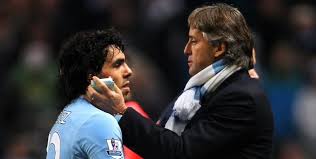 ‘Come back soon, we need you,’ was the rather blunt message to City’s captain and leading goalscorer as he rested his thigh injury at home in Argentina.

The statistics underline this sentiment. Not since January have City won a Barclays Premier League game in which Tevez hasn’t scored.

Sadly for City manager Roberto Mancini and his players, they will have to wait a little longer for Tevez to return.

With his injury failing to respond well to treatment, the 24-year-old is now expected to remain in South America until Thursday.

With Tevez being treated in Buenos Aires by a doctor he trusts, City were relaxed about his absence.

As one source said: ‘If he comes back now we will all be in Poland so he will come back to an empty training ground.’

While the wisdom of allowing Tevez to fly home remains debatable, news of Tevez’s struggle with injury will be of greater concern to City supporters anxious about their chances of winning next Wednesday’s Manchester derby at Eastlands without him.

It already seems highly unlikely that he will be ready for the trip to West Brom that precedes it on Sunday.

For City – a team that have lost their past two games – the bad news is all coming at once.

Monday  was certainly a fallout day at Eastlands. As Gareth Barry apologised for his part in a student drinking party in Scotland last week and Yaya Toure’s agent explained that City’s highest earner is suspicious of the mentality of some of his team-mates, things do no get any easier for Mancini.

‘I regret that, it was naive of me. It shouldn’t have happened,’ Barry said.

‘I’ve apologised to the manager. We were in the wrong.’

Mancini will now hope that Barry – as well as fellow partygoers Adam Johnson, Joe Hart and Shay Given – can move forward but comments from Toure’s agent, Dimitri Seluk, will perhaps concern him more.

The argument Toure and James Milner had as they walked up the tunnel at half-time during the recent home defeat to Arsenal was not particularly fierce, according to those who witnessed. A ‘frank exchange of views’ was one description.

Nevertheless, Monday’s suggestion that some of City’s players are not yet on message when it comes to the business of winning trophies hints at continuing problems among a group of players who became only the second to lose to Wolves in the league at the weekend.

Seluk said: ‘Yaya got angry last week. He gets angry if he thinks people around him don’t feel the same about winning.

‘Arsene Wenger likes Yaya very much and wanted Yaya to sign in the summer so the game against Arsenal was a very emotional day.

‘He has such a winning mentality that he will fight with anyone, player, fan or staff who does not share this.

‘When he gets angry with someone it does not mean he dislikes them or wants to disrespect them but it’s just his unwillingness to accept anything other than a total winning attitude.

‘The most difficult thing for a club which is trying to become a big club, not a middle club, is to learn the winning mentality because it takes time and there are some players who think that fourth place is already a big position.’

Given Toure’s supposed winning mentality, it is tempting to wonder just how that matches up with the fact that he drove home – albeit with permission – during the second half of the Arsenal game after withdrawing with an injury. Maybe he was too ’emotional’ to watch his team-mates lose.

Whatever the case, it is clear that Mancini has it all on as he looks to steady his team’s season at The Hawthorns on Sunday.

‘We are a team and in any team there are problems.’

When Mancini succeeded Mark Hughes just before last Christmas, it became very clear that his football would be cautious and his style of man-management rather aloof

As one friend said: ‘If you are not in the team, you may as well be dead.’

These things have, in turn, made him a little more vulnerable than some other managers to the capricious tides of player and supporter opinion. Some players don’t like his management while some fans don’t like his football.

As long as City win games, Mancini will be secure but whenever they have a week like the last one it will not be long before questions are asked.

At City on Monday there were no signs of panic. In public, at least, boardroom support for Mancini remains strong and so it should be.

The sooner Tevez returns, however, the better.