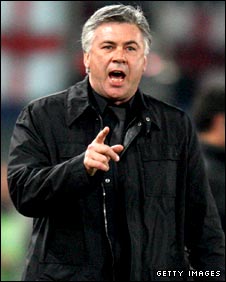 having lost the first leg of a tie at home. Only two clubs have ever produced an equivalent turnaround in the Champions League but Ancelotti has insisted there is no reason why Chelsea could not become the third at Old Trafford.

The Italian said: “In Italy, we have a saying. ‘If you have two, then you next have three’. They have to truly believe that we can win there. I don’t know if they will be able to do this. But, at the start of the game, you have to believe that you can win.”

Ancelotti knows his side need to produce a near-flawless performance at Old Trafford if they are to overturn Wednesday night’s 1-0 first-leg defeat at Stamford Bridge.

It would take an remarkable improvement from Chelsea to produce such a performance.

They did win at Old Trafford last season in a game that ultimately decided the Barclays Premier League title but that was during what was a scintillating run.

There could hardly be a greater contrast this term, with the Blues languishing 11 points behind United in the league and struggling to score goals.

Ancelotti admitted his players were not showing enough teamwork at present.

“Everyone is trying to resolve this problem we have individually,” he said after watching his side stutter to a 1-0 win over Wigan on Saturday. “Obviously, it’s better to stay in focus and work more with each other.”