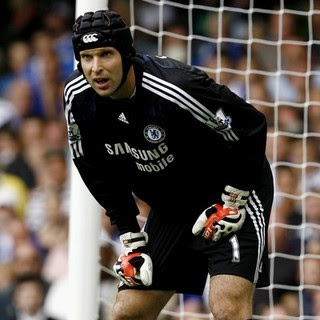 Chelsea lost 3-1 on aggregate over the two legs of their quarter-final against English rivals United.

The English Premier League leaders won the first leg 1-0 away at Stamford Bridge, before a 2-1 victory in the return at Old Trafford booked their passage to the last four at Chelsea’s expense.

The visitors finished the match with 10 men after Brazilian midfielder Ramires was shown a second yellow card with 20 minutes remaining.

“We lost both games so we can’t say that we deserved more,” Cech said.

Despite the disappointing defeats in the two legs, goalkeeper Cech insists that spirits remain high within the playing squad.

“You can see that the team is together because if you are not together then you go down to 10 men, losing 1-0 you will fall apart and we didn’t do so,” he said.

“Seven games to play, 21 points in it, so I think if you win most of the games then you can finish second. I think that our aim is to get as many points as we can.”

Chelsea manager Carlo Ancelotti is rumoured to be set for the sack at the end of the season, but Cech claims the players should share responsibility for a disappointing season.

“We win together, we lose together,” the Czech Republic international said.

“The players need to finish the season well for ourselves, the club, for everybody. We are not only playing for the manager or the owner, we are playing for the entire club.”

“It is always disappointing if you are part of a big club and you don’t win a trophy. After winning the double last season everyone thought we would defend the titles. We had a good start and then the season became difficult.”

“But we were doing well in the Champions League until the two games against United.”