Alex McLeish savoured the “greatest achievement” of his career in management after the substitute Obafemi Martins scored a dramatic late winner to break Arsenal hearts and secure the Carling Cup for Birmingham City. 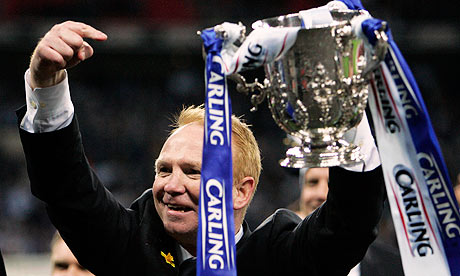 McLeish enjoyed plenty of success at Rangers but, in the giddy heat of a 2-1 Wembley triumph against all the odds, he permitted himself a lapse into hyperbole. This was Birmingham’s first major trophy since 1963 and one that has seen them qualify for next season’s Europa League, a detail McLeish said he had not realised.

Arsène Wenger, the Arsenal manager, described his players as “bitterly disappointed” and added that Laurent Koscielny and Wojciech Szczesny, whose calamitous mix-up paved the way for Martins’s goal, were “destroyed”.

Arsenal’s afternoon of frustration was compounded by Robin van Persie suffering a knee injury in the act of scoring his team’s first-half equaliser that he fears will rule him out of the Champions League last-16 second-leg tie against Barcelona at the Camp Nou a week tomorrow. The striker will undergo scans.

The stage, however, belonged to McLeish, who praised his players for the collective display and discipline they showed. “Relatively speaking, it is my greatest achievement,” he said. “At Glasgow Rangers I was expected to win trophies, even though it was still very difficult with Celtic so strong.

“But to come to England and on my first trophy attempt … for a small club like Birmingham to beat the might of Arsenal, it’s a dream come true. It is all the sweeter because nobody gave us a prayer. We were massive underdogs with the bookies but the bookies don’t get it right all the time. I am so delighted for everyone, especially the long-suffering Blues fans. It was a Titanic performance. It’s Carson Yeung’s birthday and he must think it’s easy being an owner.”

The game was decided in the last minute when, with Wenger admitting that his players were mentally preparing for extra-time, Koscielny suffered a breakdown in communications with Szczesny and Martins pounced. Birmingham’s opening goal, scored by Nikola Zigic, was also the product of sloppy Arsenal defending.

“The winning goal was a lack of communication and a lack of determination as well,” Wenger said. “When the ball is in no man’s land, someone has to take responsibility. Both of the players have apologised. Both of them are destroyed. We had enough chances to kill the game off. Maybe we were a bit nervous.”

Wenger said that Szczesny would start against Leyton Orient in the FA Cup replay on Wednesday night. “He has to pick himself up quickly. We will face a lot of questions after that mistake but we have to be strong enough to stand up to that.”

The trophy drought goes on for Arsenal. It is six years since their last success, in the FA Cup, and Wenger talked of a body blow here rather than the lift his players had hoped for. “Exactly, we don’t deny that,” he said. “It’s a massive disappointment for the team but we have massive challenges in front of us. We will not throw away a 38-game season in the Premier League because of one defeat here.”

Controversy vied for prominence. Szczesny might have been sent off in the second minute for a foul inside the penalty area on Lee Bowyer only for play to be pulled back for an erroneous offside flag. Koscielny was perhaps also fortunate to escape with yellow for an ugly lunge at Bowyer.

“Bowyer was aggrieved because he would be blasted for a challenge like that,” McLeish said. “In our last game against Arsenal he was banned for a stamp on Bacary Sagna and there were headlines saying that Bowyer was a naughty boy. That’s why he is aggrieved.

“As for the incident in the second minute, we thought that it was something that should not have been missed. My instinct was that Bowyer was onside. We threw a strop and we threatened to lose our focus but we gathered ourselves at half-time. If the result had gone the other way, I might be talking to you differently.”

The Birmingham goalkeeper, Ben Foster, was the man of the match, by dint of his second-half heroics. “Apart from the birth of my two children, that was the greatest feeling of my life,” he said. “It was unbelievable. They might have quality players but we had greater team spirit.”

The Blues captain, Stephen Carr, who initially joined on a one-month contract in 2009, said: “The fans have been waiting such a long time and this will make their year, maybe their lives. It’s amazing.”