Barcelona boss Pep Guardiola could play the same XI that won 2-1 at the Santiago Bernabeu last week. Goalkeeper Jose Manuel Pinto replaces Victor Valdes – the 36-year-old understudy has played every cup match this season. David Villa is out with a broken 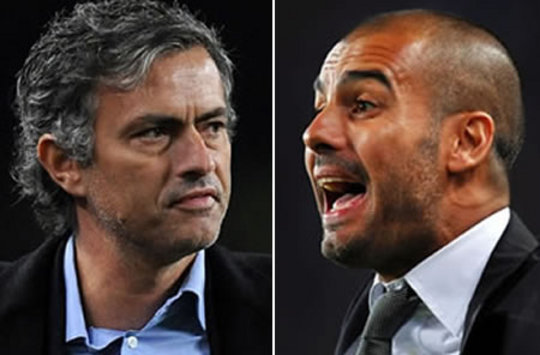 leg, while Mali’s Seydou Keita is away at the African Cup of Nations.

Jose Mourinho has said controversial Real defender Pepe will play if fit. The Portuguese caused a storm of controversy with an apparent stamp on Lionel Messi’s hand in the first leg, which went unpunished. Lassana  Diarra and Esteban Granero are both injury doubts, but both have travelled. Mourinho has no other injury concerns.

Pep Guardiola: “I hold reverential respect for Real Madrid. They are the worst team we could expect to play on Wednesday. The problem with this game is that we have already qualified and they are already out, and yet we still have to play. I predict a tight match right until the end … If we try to defend the result from the first leg, they’ll beat us. If we want to make the semi finals we’ll have to play another great match. I have a feeling that Real Madrid are going to get a goal at the Camp Nou and so we are going to have to try to get one too”.

Jose Mourinho: “We have a five-point cushion over the team everyone regards as the best in the world. When we arrived, the club had the tradition of being eliminated from the Copa del Rey by teams from lower divisions and we won the title last season. The team wasn’t a top seed in the Champions League either when we got here and we’ve just had the best run in the history of the group stage and are top seeders again. We’re leaders in La Liga and I don’t think we’re having problems or that we’re doing a bad job. Pepe will play if he’s fit. Granero and Lass have problems.”