Barcelona stopper Gabriel Milito will be out of action for 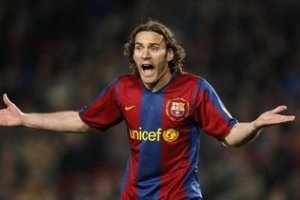 up to six weeks after the defender suffered a thigh injury in the Blaugrana’s 5-1 victory over Ceuta in the Copa del Rey.

The 30-year-old has been plagued by various injuries in recent years, and was distraught when he had to come off the field prior to half-time, according to Cadena Ser. Eric Abidal had to come on to replace Milito.

Milito had scored the Catalan giants’ second goal in the seventh minute, all but assuring the side would progress to the next round of the tournament after their 2-0 first-leg victory.

Coach Pep Guardiola will now need to find a replacement stopper to pair up with Carles Puyol for the team’s weekend match against Villarreal, with Abidal a possibility.