Barcelona president Sandro Rosell has apologised for the late start to Saturday’s match with Osasuna, which the Catalan giants won 3-0. 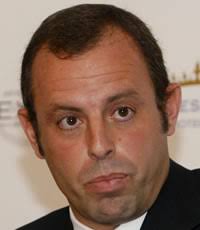 Barca originally announced the match would have to be postponed for 24 hours because of industrial action by air traffic controllers in Spain.

Instead the squad decided to make the almost 200-mile trip by rail and then bus – causing them to arrive just before the scheduled kick-off time and leading to a delay of 50 minutes before the match began.

Rosell said he was to blame for the mix up which thankfully did not seem to bother Barca on the pitch. “I assume the responsibility for the events preceding Saturday’s game,” Rosell said.

“I personally led the dealings with the Spanish federation.”

“I believed the words of the directors of the Spanish football federation and the Spanish airport authorities.” Barca coach Pep Guardiola said there had been some confusion over whether or not they would have access to air travel to the fixture. “The information that we had was that the airport would be open,” Guardiola said.

“If we had known that they were closing the airports we would have taken the train and bus, just like we ended up doing.”