Controversial Manchester City striker Mario Balotelli could be headed for a return to Serie A, according to his manager. 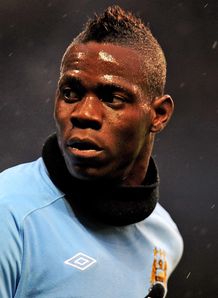 Mino Raiola said Balotelli, who was recently left out of the Italy squad after being red carded while representing City in the Europa League against Dynamo Kiev on Thursday, is happy at Eastlands but a future move back to his homeland to play club football is on the cards.”It’s an unfortunate time for Mario. It’s not a happy spell, but he’ll come out of it stronger than before,” Raiola told Sky Sport 24.”Nevertheless, there are no problems with his club or with coach Roberto Mancini. A part of the English media, the part I don’t respect that much, does everything it can to create drama.””(Italy manager Cesare) Prandelli and Mario have spoken, it was a positive conversation and their relationship is an excellent one.”Raiola hinted a return to former club AC Milan was a possibility in the future, should the Italian youngster fall out of favour under Mancini.”I hope that he can one day play in the Milan derby again,” he said.Prandelli has said that Balotelli came to him for help after his recent on-field indiscretion which led to his exclusion from the national squad.”I have heard from Balotelli. He understands that he made a fool of himself. He said to me: ‘I need help. I always ruin everything but I care a lot about the national team’,” Prandelli said.Prandelli confirmed the ‘suspensions’ of Balotelli and Daniele De Rossi for being red carded in their recent club outings would only be for one game.”I could call up both Daniele and Balotelli for the friendly against Ukraine. We’ll see,” he said.