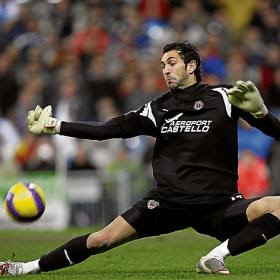 at every turn. They have also been strongly linked with Pepe Reina but manager Arsene Wenger is reluctant to splash out the £15m-20m that Liverpool would demand for him.

Lopez is the next to go under the microscope and a bid is being considered for the January transfer window. Despite being 29 years old, Lopez has played relatively few games having languished at Real Madrid for years, only featuring twice for the first team, and has clocked up less than a hundred appearances in La Liga.

However, he has impressed in his three years at El Madrigal but with only one cap to his name, Lopez is little known outside Spain and he is likely to cost a fraction of the fee commanded by Reina.