Manchester City striker Emmanuel Adebayor believes there is nothing wrong with his team-mates squabbling if it helps the club win every week, 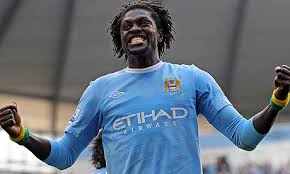 and insists his row with Vincent Kompany was driven by both players’ burning desire to succeed.

Adebayor and Kompany were embroiled in a very public on-field row during City’s 2-1 defeat at Wolves on Saturday, while there have been rumblings of discontent and suggestions of a dressing-room divide at Eastlands recently.

But the former Arsenal frontman believes that any arguments, either in training or during a match, are down to the players’ shared passion and competitive nature. And he claimed he and Kompany have been able to laugh off the reports of chaos within the City ranks.

“Sometimes you have to shout and bawl to try and get a reaction from your team-mates and sometimes that means getting them worked up in order to do the right thing for the team,” Adebayor told City’s official website.

“That’s what great teams do. It is all about passion and desire to do well and if Vincent and I are guilty of that, neither of us have a problem with it.

“We are really good friends and we have had a good laugh about some of the things that were written about us yesterday. It was funny because it is totally inaccurate. Vinnie and I love this club and are passionate about helping to make it successful.

“If that means the odd disagreement, so be it. Trust me, if I have to have arguments with all my team-mates every single weekend in order to help us win the game, I will be doing exactly that and I would want the same in return.”

Having lost successive games to Arsenal and Wolves, and dropped eight points behind league leaders Chelsea, City’s titles credentials have come into question.

Adebayor’s words echoed those of Gareth Barry, who claimed arguments – James Milner and Yaya Toure had a row in the tunnel at half-time during the recent defeat to Arsenal at Eastlands – are commonplace around the Premier League.

Sunday’s Premier League encounter with the Blues’ Carling Cup conquerors West Brom, followed by the blockbuster Manchester derby with United at Eastlands next Wednesday, should show whether Roberto Mancini’s squad is as harmonious as the players have suggested over the past couple of days.