Hercules continue to be difficult to defeat on their return to the Primera Division and the performances of shot-stopper Calatayud have been instrumental.

The promoted side came within 10 minutes of another impressive win, this time on the road against Almeria, and the 30-year-old made a string of inspired stops to frustrate the hosts. Although he was eventually beaten, the Alicante side have their glovesman to thank for picking up another point on the road.

The left-sided defender hopes to be Vicente del Bosque’s long term successor to Joan Capdevila in the last-back position for Spain, and he showed his proficiencies in both defence and attack in los Rojillos’ 3-0 win over Malaga in Pamplona.

The 24-year-old helped Osasuna edge clear of the relegation zone with another effective display of offensive endeavour, and his role will be a pivotal one if Jose Antonio Camacho’s side are to avoid becoming embroiled in a relegation battle.

The World Cup winner has been instrumental in the Yellow Submarines’ best start to a season in their history, and on Sunday evening he kept out Atletico Madrid with a towering defensive performance that allowed Sergio Aguero no room to breathe.

The little Argentine attempted to kick start Atleti into action, but Marchena acted as his shadow for much of the match, reducing Aguero to a frustrated figure, as Villarreal’s unbeaten run extended to nine matches in all competitions. 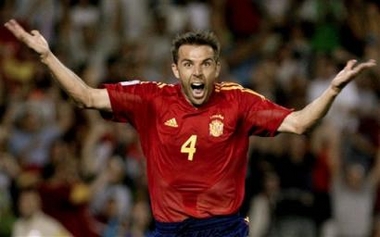 The central defender typified the resilience of the Islanders as they managed to pull off the shock result of the weekend by triumphing 2-1 against Valencia at the Mestalla.

Despite being camped in their own territory for much of the second half, the Mallorca back four, with Ramis at its heart, repelled everything that Los Che could throw at them, and continued their superb record against La Liga’s front runners, in the wake of their draws against Real Madrid and Barcelona already this season.

For seventy minutes of their match against Athletic Bilbao, Sevilla, and in particularly Romaric, were completely dominant in what was eventually an astonishing 4-3 victory.

The Ivorian has been far from a fan favourite since his move from French football in 2009, but he showcased his abilities against Los Leones; his passing was breathtaking, with the highlight being his 50-yard through pass perfectly onto the foot of Fabiano for his fantastic lobbed goal.

Sevilla have been desperate to discover an appropriate blend of grit and guile in the centre of their midfield, and on the basis of this display, Romaric could be the answer.

Team-mate Jonathan De Guzman was also inspirational, but Castro’s double strike earns him his spot as the Islanders recorded a rare away victory, at the Mestalla, no less.

His early penalty set the tone for a successful nights work for Michael Laudrup’s team, and when Edson Ramos’ low shot was saved by Miguel Moya, Castro reacted quicker than anyone to head the ball into the corner of the net. Aside from his goals, he remained a real threat on the break, and the 26-year-old gave a indication of what he is capable of when on form.

Second appearance in the TOTW this season for the slick German, who continues to shine at the Santiago Bernabeu. Racing did not offer much resistance to him and his attacking partners, Messrs Higuain, Di Maria and Ronaldo, but Oezil once again pulled all of the strings, providing Ronaldo with a simple goal, and managing to get on the scoresheet himself after the interval.

It has been a superb week for los Blancos, and Oezil has been at the heart of their recent resurgence to form. At this rate, Kaka will have an incredibly tough time displacing the 21-year-old from the playmaking role when he returns from injury.

Three los Blancos’ stars find their way into the team this week, which highlights their supremacy over Racing throughout their 6-1 win. Di Maria and Oezil played as if they have been teammates their entire career, and the way in which the Argentine sliced open the Verdiblancos back line was a joy to behold.

The former Bennfica winger notched up three assists during the match and was constantly in a position to receive the ball and attack. This display underlines the gradual development of the 22-year-old as the season has progressed.

What more can you say about the Portuguese? He has well and truly rediscovered his goalscoring touch after an ineffective start to the season, and although his four goals were all simple finishes (including one from the penalty spot), his all-round performances are bordering on the unplayable.

With CR7 insatiable, Real Madrid retained their spot at the summit of La Liga as well as securing a spot in the team of the week for the second week in a row, and their challengers face the unenviable challenge of displacing them.

The Blaugrana were far from at their fluent best in their match against Zaragoza, but for the second time in a week relied on their talismanic figure to secure a victory.

Messi netted twice against Copenhagen in the Champions League in midweek, and did so again at la Romareda, with finishing prowess of startling efficiency. With David Villa continuing to misfire, The Flea stepped up, slickly rolling home past Toni Doblas before volleying clinically after the interval. Messi continues to produce moments that maintain Barcelona’s self-applied high standards.

The Brazilian has cut a frustrated figure for much of the season, clearly unhappy with his own standard of the performance as the team on occasion has suffered. However, he gave an indication that he could be recapturing the form that has previously endeared him to the Ramon Sanchez Pizjuan’s pilgrims, as he struck twice to see off Athletic Bilbao in a thrilling 4-3 contest.

His first goal carried an element of luck, with Kanoute’s effort deflecting the ball into his path, but there was nothing fortunate about his exquisite control and lob over Gorka Iraizoz later in the match. Fabiano ran to the crowds in celebration – is he finally back to his best?

Flops of the Week

Leonardo Ponzio (Zaragoza) – His idiotic punch out at Dani Alves, no matter how the Brazilian exaggerated it, effectively ensured that his team had no route back into their match against Barcelona.